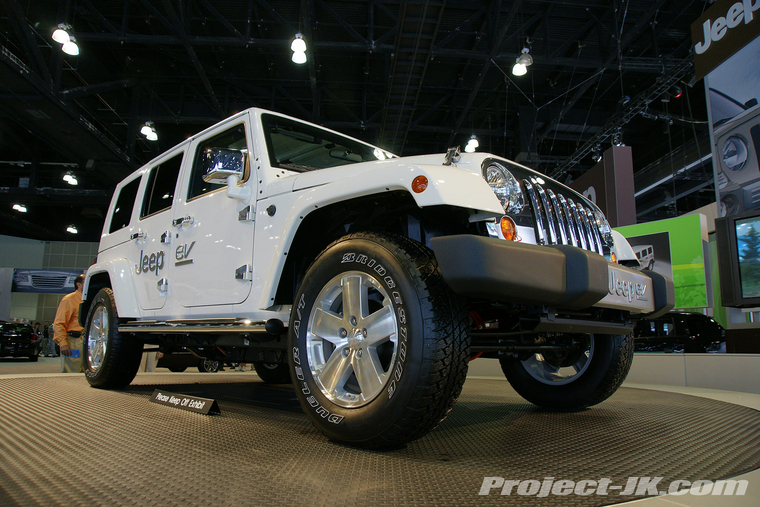 Back in 2008, Cindy and I got a chance to see a prototype Wrangler at the LA Auto Shot called the "ev". Essentially, it was an electric Wrangler and apparently, it and/or a hybrid version of it is something they are still kicking around for the new 2017 Jeep Wrangler. Check out the article that was just published in AllPar...

At Chrysler, Ram has been slashing fuel consumption by cutting parasitic losses, using eight-speed automatics, and spreading diesels to the 1500 line. Jeep is busily creating the new Wrangler, with an eye towards saving weight, and Chrysler has been advertising for a senior buyer for large aluminum castings.

While many Jeepers have called for a diesel in American Wranglers, because they conserve fuel while boosting low-end torque, industry insiders are talking about other Wrangler options. For one, there’s likely to be a lot more aluminum in the rugged Wrangler, perhaps including the body tub (a hydroformed steel frame seems to be likely, too).

There’s been some quiet buzz around the idea of a hybrid Wrangler. This would likely not be an all-out effort like Prius, but a repeat of the Durango/Aspen “drop in hybrid” type of solution. We’ve been told to look for something like the FEV seven-speed dual-clutch full hybrid transmission, whose electric motor smooths the ride by eliminating gaps between shifts.

Hybrids have downsides, including added weight and space requirements. The weight of hybrid drive systems has fallen, but current systems still add about 100 pounds and the space needed for the battery pack could be a problem, especially in the two-door Wrangler (perhaps it would be an Unlimited option only).

Whether Jeep actually goes forward with an alternative powertrain may well depend on whether fuel prices shoot up over the next few years. The company may be planning something for their back pocket,” or for sale in countries where fuel is more expensive. An advantage of transmission-based hybrids is they can be used with either diesels or gasoline engines. Wrangler is a prime candidate for change, since it sells very well but has (along with other cars in its class) poor fuel mileage.

Regardless of how they do it, we can probably expect a lighter, and hopefully equally rugged, Wrangler in the next generation. As we noted last week, Jeep Wrangler is the Jeep that controls all other Jeeps; they can’t afford to screw it up.

You can see the full article on AllPar here:
http://www.allpar.com/news/index.php/2014/07/wrangler-hybrid
Click to expand...