Will the 2017 Jeep JL Wrangler Target the "Soft" SUV Market?

Staff member
Clifford Atiyeh of Car and Driver just published the following article that highlights a quote from Mike Manley, CEO of Jeep and in it, states in a nutshell that the new Wrangler could target the "Soft" SUV market. Check it out... 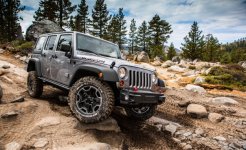 “It’s a Jeep thing” might be a statement that select people at Fiat-Chrysler don’t understand—but let’s hope not.

As quoted by Automotive News, Jeep CEO Mike Manley says that the next-gen Wrangler, which is due in 2017, would need to compete with “soft” SUVs and that not all Wranglers need to be as capable off-road.

“You can’t sell 19,000-plus retail Wranglers [in May] to people who just want to go off-roading,” Manley told the industry paper. “Why would, for example, somebody else’s SUV that’s really an on-road ‘soft’ SUV not be for me a genuine target for Wrangler?” But before JK and TJ owners light effigies at the next Jeep Jamboree, Manley knows that the Wrangler enjoys a thick-as-blood fan base who are more loyal than the Secret Service. Later in the AN article, he states that “one thing that [Jeep] will not do is dilute what Wrangler stands for.”

As for the redesign, new powertrains and lighter materials are almost guaranteed. The Wrangler could benefit from more gears and, as we were told by Fiat-Chrysler CEO Sergio Marchionne, possibly aluminum construction. Although the 2.8-liter diesel in European Wranglers performs well, Manley is on record saying that sales of the Grand Cherokee EcoDiesel need to improve before any new Jeep diesels arrive stateside. A four-cylinder gasoline model might make sense if Chrysler can sort an engine, possibly through turbocharging, that’s burlier than the 2.4 found in the new Cherokee.

But we’re not sure why the Wrangler—which is among the very best vehicles extant in terms of resale value—needs to target “soft” competitors when the new Renegade and the Cherokee provide plenty of ammo in that fight. To that end, Automotive News speculates that the Wrangler’s solid axles could be ripped out for a lighter independent setup.

Read the whole article at Car and Driver here:
http://blog.caranddriver.com/next-j...rget-soft-suvs-but-it-wont-be-ruined-we-hope/
Click to expand...